Sale & Clearance
Deal Of The Week

This reagent bottle is made from durable borosilicate perfect for storing anything you need. Borosilicate is great because unlike ordinary glass it won't crack with rapid changes in temperature.

Community Q&A
Powered by TurnTo
Questions that need answers | My Posts
Start typing your question and we'll check if it was already asked and answered. Learn More
Do not include HTML, links, references to other stores, pricing or contact info.
My question is about:

If your question is about more than one item, click + to add them.

Reviews
Powered by TurnTo
Review More Purchases | My Posts
4.0 / 5.0
6 Reviews
5 Stars
4 Stars
3 Stars
2 Stars
1 Star
3
1
1
1
0
Rated 5 out of 5
great deal
Works as well as my Kimax media bottles for pressure sterilizing wort. My pressure canner lets me make enough sterile wort for seven starters at one time.
May 15, 2020
Roy Roberts
Purchased
1 year ago
Rated 2 out of 5
Domed bottom makes stir bar quirky
Good quality glass, and a great bottle overall, but had trouble using it with my magnetic stirrer because of the slightly convex bottom.
September 1, 2018
Alex Davit
Response from MoreFlavor
Hey so sorry about your experience. We try very hard to create the best experience for our customers and provide quality products. Please give us a call at 1-800-600-0033 or email us at info@moreflavor.com so that we can assist you. We are here to help. Cheers!
May 27, 2020
Malcolm MB
Rated 3 out of 5
Microwave big enough? Use caution...
These are about 9" tall and won't fit in a smaller microwave. It's pretty easy to induce a wort volcano, so until you know how things work for the microwave you have I'd advise a foam reducer and/or short bursts of cook time while you watch it like a hawk. Not as convenient as I had hoped, but still easier than boil then chill the day before brew day.
January 26, 2018
David Swager
Purchased
over 3 years ago
Rated 5 out of 5
Perfect. Just remember your chemistry classes. Don’t take out of autoclave and rinse off the mess. They implode! Not a product flaw, just science. 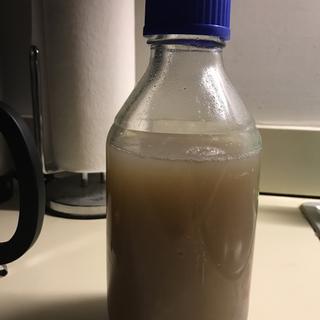 Filled with potato dextrose agar. Just warm in a bath and pour your plates or slants.
January 25, 2018
John H
Purchased
over 3 years ago
Rated 4 out of 5
Some good, some bad, but on balance a great idea
I have been looking for an easy way to make starter wort in advance to simplify the process. I looked into using canning jars, but that required a pressure cooker and related canning equipment that I don't have. I thought about using canning jars without a pressure cooker, but was too concerned about a possible infection. While it was available, I used the FastPitch canned wort which was great, but it is no longer available. Then I discovered these bottles and thought I would give them a try.. I bought two for starters (pun intended) and made my first batch: mix DME with water in measuring cup, pour into bottle, add fermacap to prevent boil over, place in microwave for 6-7 minutes until it boiled, remove from microwave (use oven mitts), cap and place in refrigerator. Voila, ready to use starter wort. When it was time to make a starter, I just removed the bottle from the refrigerator and let it warm up to room temperature before using.

I made starter wort with my two bottles a number of times without any problems or infections. However, a few weeks ago, I was making a new starter wort when the bottle exploded after I put the cap on. I had microwaved the starter wort as usual, however, this time, I had a slight boil over in the microwave. I removed the bottle from the microwave, put it in the kitchen sink, put the cap on and then ran some water over the outside of the bottle to rinse of the boil over wort. BOOM! The bottle shattered into 6-8 large pieces. I know it was probably foolish to rinse the hot bottle off with tap water, but I expected it to be able to withstand the temperature change. Live and learn.

Despite the explosion, I ended up buying 2 more bottles and just finished filling them with starter wort without any problems. The convenience is worth the risk in my opinion. However, I will never run tap water over a boiling hot bottle again, even if it is borosilicate.
November 7, 2017
Albert P
Rated 5 out of 5
Great idea great product
I really like being able to make a large batch of starter wort in advance. I have purchased two and used them both twice with excellent success. I plan on purchasing at least two more.
The only con I have is the thin blue top gasket comes off during cleaning. It is a little hard to get back on and there isn't any replacements available yet. I know I'm going to loose one or break it.
August 15, 2017
Charles S.